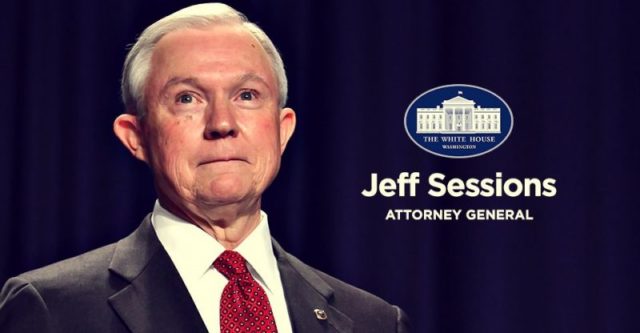 After facing much scrutiny for having contact with the Russian ambassadors. Jeff sessions spoke to a Christian religious freedom Avicii group known as anti-gay stances Tuesday evening and the justice department is keeping his remarks under wraps.

At the Summit on religious liberty hosted by the alliance defending freedom, things were very secretive add the departments of Justice is keeping quiet one requests to release sessions full comments. Alliance defending freedom which hornets website says it is dedicated to promoting religious freedom but is also known for having taking aggressive anti-gay marriage stance and is currently embroiled in a high profile case that will be heard by the Supreme Court next term.

Submits this attorney general Jeff sessions is embattled in a deep Russia probe where it seems previous under oath comments were found to be possible perjure in nature. Jeff sessions has maintained that he has no recollection of important information dealing with Conversations had with the Russian affiliates about Donald Trump in the election.

ADF is the most extreme anti-gate legal organization so extreme that it does not concede even that gay or transgender people should be permitted to exist as such said Shannon Minter of national center of lesbian rights .They are truly destructive in our country and it is appalling that the Atty. Gen. of the United States Wood lend them ear of this office.

President Donald Trump Not too long ago signed an executive order in title promoting free speech and religious liberty was directed sessions to issue guidance interpreting religious liberty protections in federal law sources say nothing has happened as of yet.

This month sessions played she’s support to continue to enforce hate crime laws aggressively and for the first time his focus on crimes against those in the transgender community despite previous opposition as a senator to the federal hate crimes prevention act.

A number of Republicans say Jeff sessions should recuse himself of any investigation into Pres. Trump’s ties to Russia while Democrats are calling for him to resign.   ‘I don’t recall any discussion of the campaign in any significant way” it was in no way you some sort of coordinating of an effort orDoing anything improper and I don’t believe anybody that was in that meeting Would seen or believed I said one thing that was improper or unwise” Jeff sessions.

President Donald J Trump came to session’s defense on Twitter saying Jeff sessions is artist man he did not say anything wrong . You could have stated his response more accurately, but it was clearly not intentional. This whole narrative is a way of saving face for Democrats are losing an election that everyone thought they were supposed to win. He goes on to say Democrats are overplaying their hand. They lost the election, and now they have lost their grip on reality. The real story.

He further goes on to say the real story is all of the illegal leaks of classified and of information,It is a total witchhunt.

Adam Schiff Democrat of California says he’s “come to the reluctant conclusion that the attorney general ship chef step down, As a senator Mr. sessions demanded complete and truthful testimony by those appearing before him for confirmation,I don’t believe he met his own rigorous standards.” It goes on to say have concluded sessions must up down his testimony was misleading, His explanation not credible an independent prosecutor is needed.

Not limited to just democratic scrutiny Jason Chaffetz republican of Utah was the first influential Republican to say the former Sen. Sessions should recuse himself after reports he failed to disclose conversations he had with the resident ambassador to the US.

Of the Republicans follow Rob Portman Susan Collins in the aspect of public confidence says sessions to stay out of the investigation .

In the Name of God, the Most Compassionate, the Most Merciful

I Think For All

Your Journey To Limitless Health & Vitality